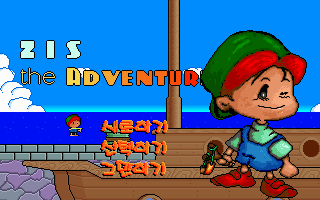 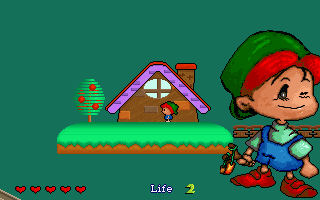 Zis the Adventure is a Korean-made colorful platformer starring a young boy named Zis who finds a letter sealed in a bottle and travels to the magical land Lisnia to rescue its inhabitants from evil pirates. The protagonist's default weapon is a slingshot that can hit targets from afar. Watermelons scattered through the stages award the hero with various costumes when shot at, each costume granting him a unique weapon. These special weapons include a yo-yo that can kill an enemy in one hit; a magician outfit that allows the boy to knock on his hat to release a swarm of birds; stars that act like homing missiles, etc. Diamonds and candy can be collected to increase Zis' health (represented by hearts), which carries over to the next stage. Many stages introduce diverse challenges, the recurrent one being collecting keys to open doors, which is featured in several stages. In some stages the boy can also float in the air for a short while with a little umbrella and can attach ropes to upper platforms and climb on them. There are also slides, hats that propel the boy to otherwise inaccessible platforms, pencils that draw platforms when activated, floating cushions, and other special objects. Setpieces include a scrolling shoot-em-up level and a stage where Zis rides a dolphin. The game consists of six "worlds" that the player must complete in a linear fashion, each encompassing three stages. There are no boss battles in the game. There is no possibility to save the player's progress; however, unless the player quits the game, he or she can opt to replay any already completed stage with an unlimited number of continues even after the protagonist runs out of all his lives.