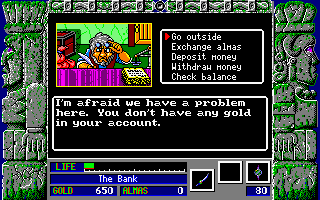 The ancient demon Jashiin has slept for two thousand years. When he awakens, he directs his wrath towards the kingdom of Zeliard, whose rulers of yore have allegedly harmed him. For 115 days, a sand rain devastates the kingdom, turning it into a desert. To complete his cruel revenge, Jashiin turns Felicia, the princess of Zeliard, into a stone. The valiant Duke Garland sets out on a quest to vanquish the demon and restore the princess to her true form. To do that, he must collect the Nine Tears of Esmesanti, which alone can reverse the terrible curse. Zeliard is a side-scrolling action game with platforming and role-playing elements. The game world is divided into hostile labyrinths, which occupy its largest portion and contain maze-like passages for Duke Garland to traverse, as well as enemies that must be dealt with. Crests and keys must often be collected in order to ensure the progress to the next area. Garland takes damage from enemy attacks as well as the environment (hidden spikes, high temperature, etc.), but suffers no damage should he fall off a platform. The hero uses his sword to combat the enemies, and shield to defend himself. He can also learn and cast projectile offensive magic. Special items can restore his health, increase the damage inflicted with the sword, grant additional protection, etc. Various types of clothes can be equipped; these can bestow the hero with further enhancements and immunities, such as prevent him from slipping on ice, allow him to jump higher, etc. The Duke will visit different towns during his journey. In these towns, he can rest, replenishing his health, purchase and repair weapons and armor, acquire potions, and learn magic spells. Currency is obtained by exchanging enemy spirits for gold in banks. These spirits (called "almas") also serve as experience points: after the player has obtained a sufficient amount of them, the protagonist receives upgrades to his health and magic points from a local town sage.