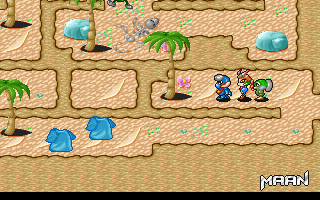 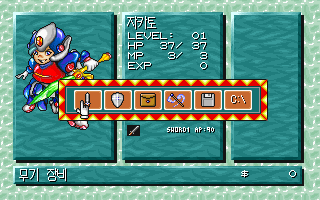 A modern-day schoolboy wants to play a video game, but his mother gets angry and punishes him. While crying, the kid is miraculously transported into a strange fantasy world populated by anthropomorphic animals and other creatures. He becomes the mighty warrior Zakato, and must save that world from an evil goddess by finding two benevolent ones and joining forces with them. Zakato: Maan is a Korean-made role-playing game in Japanese style. Basic combat mechanics are reminiscent of Chrono Trigger : enemies are visible during exploration, and battles take place in the same environment. Combat is turn-based with a real-time element, nearly identical to the ATB system from Final Fantasy games. Characters can use regular attacks and elemental magic, but no other special moves.