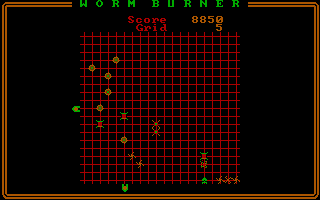 An adaptation of Gridrunner, where the player is assigned to defend Earth from a herd of ravenous space worms, who have apparently developed a particular appetite for the planets of the Solar System. Action takes place along a grid; the player's ship is free to move about its bottom rows, though it can only fire upwards. Each attack wave brings more of the marauding creatures into the fray. The worms descend from the top in Centipede -like fashion, weaving and winding across the playfield. Knocking out a worm segment will only split the creature in two; the blasted segment will keep blocking traffic as it mutates. Eventually it will fall off the grid, destroying everything in its path. The defense grid is equipped with two automatic laser guns, which prowl the edges and attempt to zap the intruders, but they only make things worse - being caught in the crossfire is bad news for the player's ship.