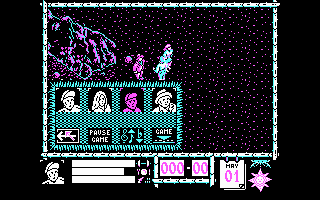 While flying three members of the same family, your planes crash-lands in an area where it soon becomes clear that time has stood still - dinosaurs still roam the area, and the humans are primitive and carnivorous. Your task is to guide them to safety through the complex isometrically viewed world (using the same basic game engine as Denton Designs ' Great Escape license). Hazards to be faced include the aforementioned dinosaurs and cavemen, as well as sea monsters, precarious mountainous ledges and dilapidated bridges. Objects including weapons and first aid kits can be collected. Each character has his own distinct behaviors - one becomes hungry easily, while another is only really competent while his fiancé survives. Although the ultimate aim is to save all four characters, you can continue while at least one is alive.