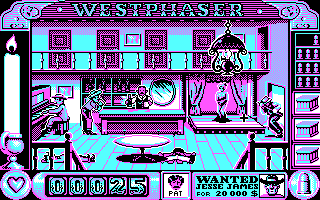 This game came as a pack-in title with Loriciel's light gun controller of the same name. Most light guns opted for a futuristic look and feel, but the West Phaser was inspired more by 19th century Colt revolvers, and aptly enough the bundled game was a Western-themed shooter - with similar mechanics to Operation Wolf, except for the stationary screens. Up to six players can pick their characters from a Who's Who of the American Old West: Doc Holliday, Calamity Jane, Will Bill Hickok, and every other big-name lawman and gunfighter in collective imagination. Outlaws like Jesse James, Billy the Kid and Belle Starr are sowing terror in the murky saloons and dusty streets, and it's your job to stop them if you're after that coveted Sheriff's badge... or the big fat rewards on their heads. Each location throws wave after wave of humorously-drawn attackers at you - bandits, cowboys, Indians, Mexicans, all thrown together into a big pile of cartoonish violence. A burning candle represents your life bar and there's plenty of enemies trying to snuff it out, so you'll have to be quick on the draw (but don't forget to protect the innocent). When the face of the bandit you're after starts blinking on the status bar, prepare for the showdown: nail them and the reward is yours. Apparently the light gun was not the biggest success, and less than three years later the game was re-released, this time with support for other input devices - and a new title, Steve McQueen: Westphaser, despite having exactly nothing to do with any of McQueen's characters.