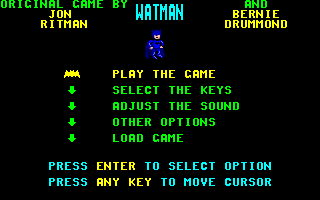 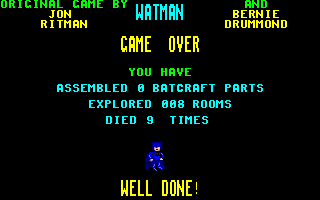 This remake of Batman adds new color graphics and sounds to the isometric action-adventure from 1986. As in the original, the player controls Batman (renamed to "Watman" to avoid litigation) in his quest to assemble the hovercraft and rescue Robin. The batcave is filled with bizarre creatures and surreal rooms, where dangerous roaming enemies have to be avoided and hazardous environments must be navigated to collect all the vehicle pieces and finish the main goal. Watman can only use his special abilities after finding and equipping one of his famous gadgets. The boots allow him to jump, the bag lets him carry objects, the thruster gives horizontal control when falling and the belt slows the speed of descent. Other items give temporary powers, like energy pellets that increase Watman's speed, shields that make the hero invulnerable for a short time, spring boots for higher jumps, a Batman doll that gives an extra life and a neutralizer that removes all powers. Some rooms have batsignals that provide a rudimentary way of saving progress, allowing the player to resume from that point after losing all lives. The PC remake has the ability to save the game at any place with the F2 key, and load it later from the main menu. Batman loses one life with each save, and the player can't use this function when the number of remaining lives is zero.