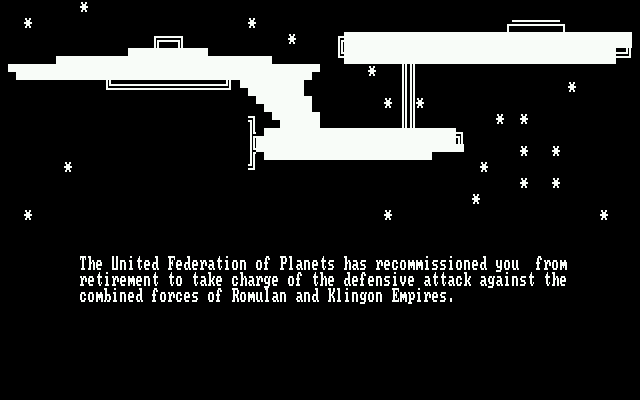 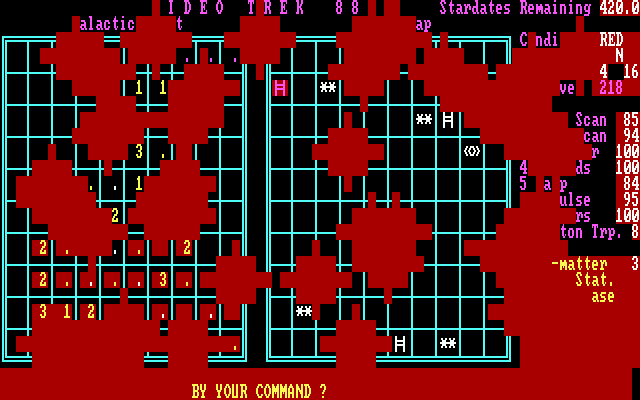 Another variation on the original Star Trek computer game, and one of Windmill Software's first products. The Klingon and Romulan empires have formed a United Front for picking on the Federation, and the player is put in command of the USS Enterprise, in all its ASCII glory, to counter the threat. Enemy forces are spread throughout the grid representing the galaxy - 10x10 sectors in this version, with each sector having its own detailed map - and must be eliminated before the stardate limit expires. To that end, your arsenal includes phases, photon torpedoes and antimatter pods; your warp drive will take you across the galaxy, and impulse power lets you steer your way within sectors. Ship statistics and system damage are tracked in detail, so if you plan to live long (not to mention prosper) be sure to use the ship's computer to distribute power as needed, and dock at a starbase from time to time to refuel and repair. This adaptation boldly goes and adds a few enhancements, most significantly a real-time element: enemy ships will continuously attack and dodge while you're warming up the captain's seat. Five difficulty levels are available, and besides the usual Klingon ships, higher levels feature Romulans, Commander-class starships, and even the occasional Tholian vessel (called "Tholean" here). Torpedoes may be fired at a star to induce a nova (which conveniently disposes of nearby enemies), and certain events occur randomly, e.g. supernovas that completely destroy a sector. Thanks to the 80-column text mode, a single tactical screen suffices to keep track of the action.