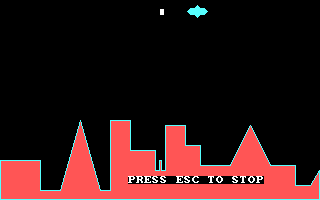 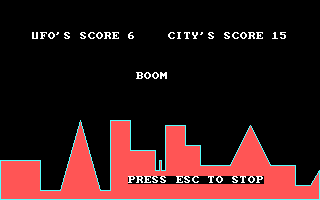 In this simple shooter, a city faces off against a never-ending succession of alien saucers that seem to have taken an interest in flying over its curiously-geometric skyline. There's only a single gun to shoot them down with, and it is necessary to lead the target based on its varying altitude and velocity. The UFOs themselves do not seem to mean any harm to the angular architecture below, and stoically attempt to gain passage without ever fighting back, so why they're being picked on is an open question. Be that as it may, the city scores one point for each successful hit by the player; if a saucer gets away, it's one for the aliens.