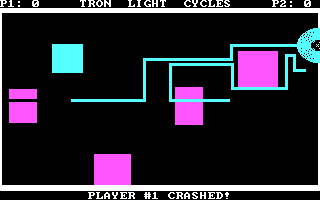 In yet another game inspired by the famous movie scene, two (human) players challenge each other to a reckless match of light cycling -- guiding their vehicles throughout the top-down playfield while trying not to plow into the surrounding walls, or into the trails that their light-cycles leave behind. In this particular version, both belligerents are beset by big blocky boxes that clutter the arena; each round brings a new and random arrangement of these obstacles, which our cyclists would be wise to avoid. Other than changing directions at will, the players may accelerate or decelerate to control their speed of movement. Crashing into anything ends the round and awards a single point to the opponent, and the first player to reach a score of ten gets the game.