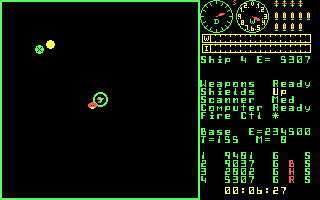 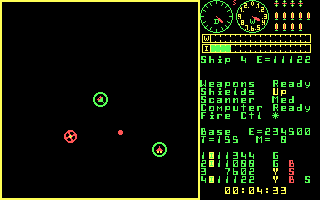 A real-time strategy/action game set in a randomly-generated universe, for one or two human players (the computer can bring the total number of combatants up to four). Each side starts out with a starbase and up to twelve ships, and sets out on a mission of arbitrary length, to explore strange new worlds, to seek out new special items and new stronghold planets, and to boldly go and blast the enemy's base and ships out of the stars. In an early example of remote multiplayer support, two human players may battle each other via modem - with or without extra computer enemies. Despite its title, Trek has little to do with the grid-locked, turn-based Star Trek school of games, although that universe's influence is apparent. Instead, it takes place on a continuous zoomable map in real time: ships are free to roam the galaxy, locate and claim planets for various types of bonus items, dodge rogue ships and astral phenomena, and battle the enemy player. Each ship is given its own arsenal of offensive, defensive and tactical systems, plus an auto-pilot with several programmable behaviors; the starbase can repair (and rebuild) your fleet. Victory is achieved by eliminating all enemy starships. Optional features include playing in multiple galaxies and the choice of a time limit.