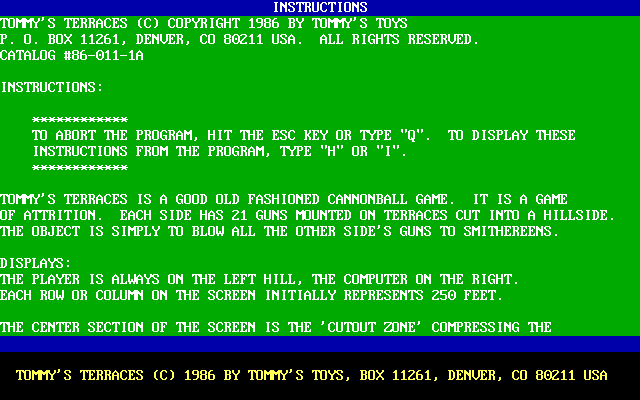 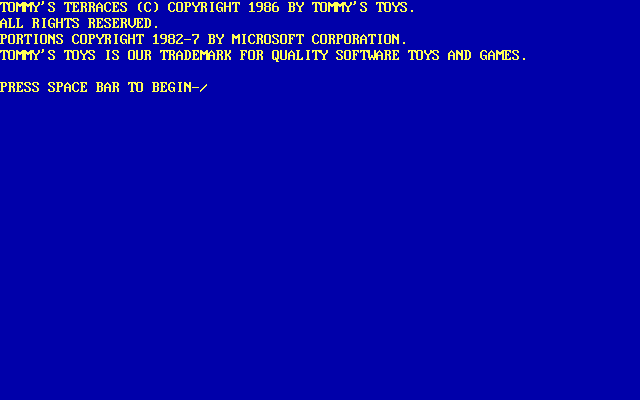 Tommy's is a shareware artillery game for one player against the computer. The game screen is divided into two halves. Each half contains a sloping hillside with an array of canon on it, the computer controls the canon on the right slope and the player controls the canon on the left. In the centre of the screen is a 'cut out zone' which represents a compressed view of the space between the two hills. The player and the computer fire shells at each other with the objective of destroying all the opponents guns. Shells can be fired from any of the player's canon, the player uses arrow keys are used to switch between those that remain. While the shell is in the 'cut out zone' there is a brief pause during which the player can change their active canon to prevent its destruction. There are four modes of play: Rounds - where the computer and player take turns to fire at each other, the game ends when all of one player's guns are destroyed Free For All - where each player fires at will, again the game ends when one player loses all their canon Chicken 1 - which is the same as Rounds but the game ends when one player loses their designated canon Chicken 2 - the same as 'Free For All' but the game ends when one side loses it's active canon The game is entirely keyboard controlled. It has basic sound effects and command line switches to start the game with sound turned off and to force either a colour or monochrome display