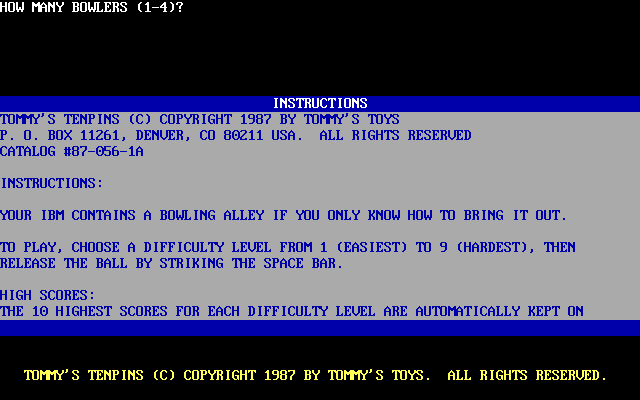 Tommy's Tenpins is a single-player, shareware game for up to four people. As with most of Tommy's games it uses character graphics and is entirely keyboard controlled. It has basic sound effects and command line switches which, among other things, can start the game with sound turned off and/or force either a colour or monochrome display. This game has nine skill levels, in-game instructions, a high score table and basic sound. The lower half of the screen is given over to a representation of a bowling lane running left to right. On the far left the ball, represented by a 'O' character, moves up and down at the end of the lane with great speed. The player has to judge the right time to press the spacebar to release their ball. The ball travels in a straight line across the screen where the pins are set up. Success here depends on timing, there's no allowance for spin, or the speed or weight of the ball.