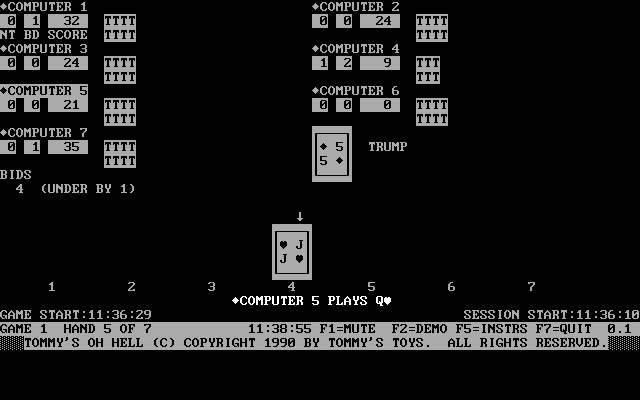 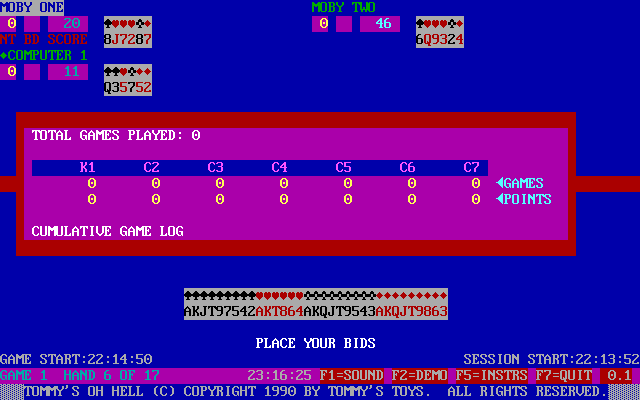 Tommy's Oh Hell is a shareware card game for one to seven players. Three is the minimum number of players needed for a game and the computer will play as any number of players to make a game possible. Briefly Oh Hell is a trick taking game in which players bid or nominate how many tricks they will make. Players score for making exactly the number of tricks they bid in which case they score one point per trick and a ten point bonus. Play continues for a specified number of hands rather than until a player achieves a specified number of points. The number of hands in a game varies with the number of players, the first deal starts wit one card per player, the second two and so on, the game stops when there aren't enough cards to go round. Oh Hell has been around for a while and has many variations, those implemented in this variation are: Zero Contract Option: A player bidding to take zero tricks and achieving this scores five points plus one point for each card in their hand Simultaneous Bidding: The game can emulate this as knowing what other players have bid is a distinct advantage Uneven Bids: If bids are made sequentially, i.e. they are not simultaneous, then the game can ensure that the total number of bid tricks does not equal the number of cards dealt. Up The River, Down The River: The first deal is one card per player, the second deal is two cards per player and so on until there are not enough cards left to deal another complete round. Then the process is reversed dealing one card less to each player so that the game ends with a round of one card per player. The game is entirely keyboard controlled. It has basic sound effects, a demo mode, and command line switches to start the game with sound turned off and to force either a colour or monochrome display.