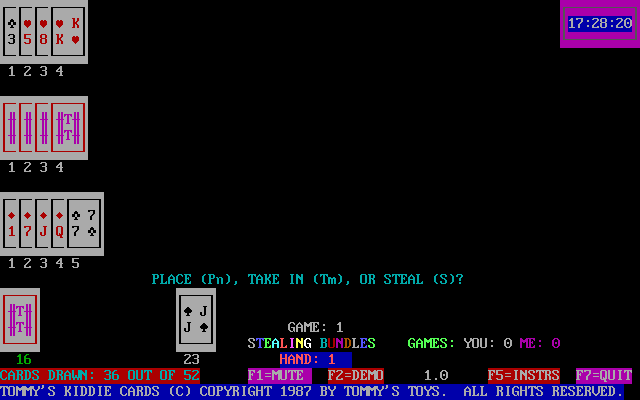 Tommy's Kiddie Cards is a shareware product containing two simple card games for children. The games are: Go Boom: One player vs the computer using a standard fifty-two card deck. Both players start with seven cards. Player one leads a card, player two must play a card of the same suit or the same rank. If player two cannot play such a card they pick up a card from the deck and continue to do so until they can. The trick is won by the highest card in the suit that was led. The first player to void their hand of cards shouts 'BOOM' and wins the hand and scores points based on the contents of the losers hand. Winner of the game is the first to score one hundred. Stealing Bundles: This is a simplified version of the card game Casino. It's also a one player vs the computer game using a standard fifty-two card deck. Both players start with four cards and either play a card to the table, take a card from the table, or steal their opponent's bundle. The player with the most cards in their hand when the deck is exhausted, wins. The game is entirely keyboard controlled. It has basic sound effects, a demo mode and command line switches to start the game with sound turned off and to force either a colour or monochrome display.