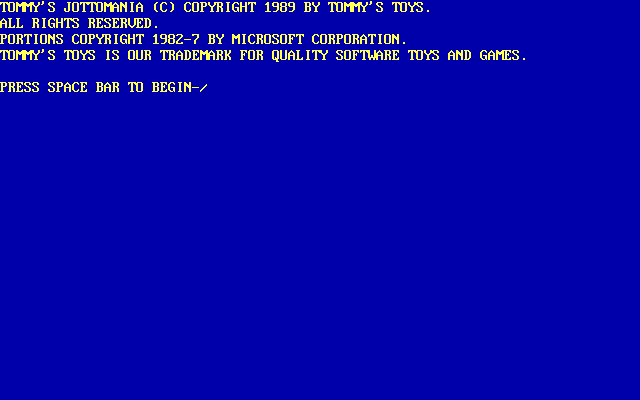 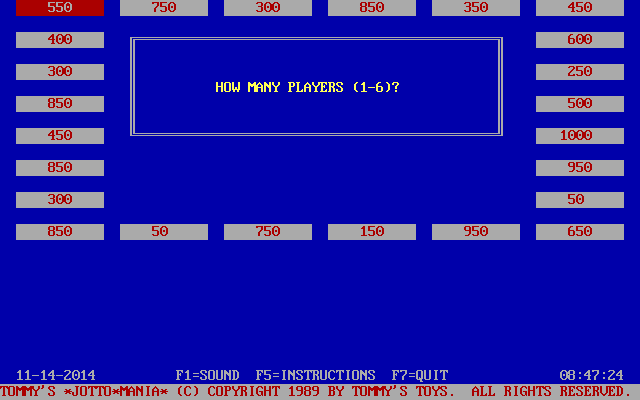 Tommy's Jottomania is a shareware code breaking game. The computer selects a secret word, all words are five letters long, and the player has twenty attempts to deduce what the word is. They do this by entering letter combinations of their own and being told whether their combination contains any of the letters in the secret word. This implementation can be played in two modes: Solo Mode: where the player plays alone and starts with a score of ten thousand points but loses one hundred points per guess Tournament Mode: This is for two to six players and is played like 'Wheel Of Fortune'. In their turn each player spins the wheel but, instead of guessing a letter they guess the word. The turn continues until a player spins either bankrupt or lose-a-turn, or the player's guess has nothing in common with the secret word. After each 'regular round' there is a bonus round where the winning player gets to play a sixty second Solo mode game. Hurry-Up Tournament Mode: This is an optional feature of the Tournament mode, players can trigger it at any time and, basically, it stops all the wheel spinning part of the game and players just take turns guessing the word. Other features include the option to abort a difficult word and an on-screen display of letters used. The game's data file is limited to three thousand words and can be edited by the player to add new words. The game is entirely keyboard controlled. It has basic sound effects and command line switches to start the game with sound turned off and to force either a colour or monochrome display.