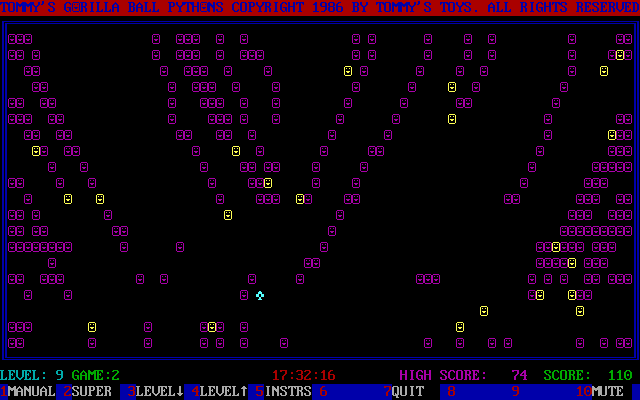 Tommy's Gorilla Ball Pythons is a single-player DOS game. The player controls a gun which fires alternately up, left, down and right. This is automatic, the game is not about firing as fast as possible, it's about strategy and making sure each shot counts. The gun will not fire while the previous shot is still on screen and a shot, once fired, will travel to the edge of the screen wiping everything in its path. Pythons spring from various points around the edge of the screen. These grow inwards towards the player who starts in the centre of the screen. The objective of the game is to attain as high a score as possible by shooting pythons. A shot passing through the body of the snake will make a hole and score points but a shot that hits the snake in the head will stop it growing. The game has nine levels of difficulty and records the top ten scores for each difficulty level.