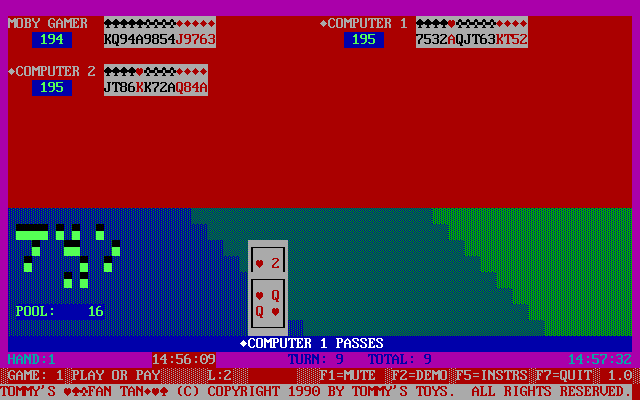 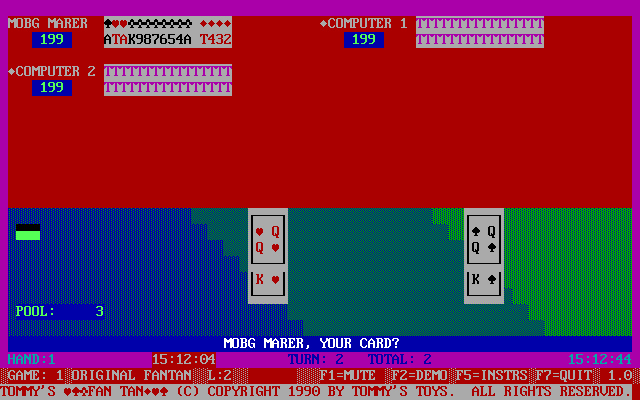 Tommy's Fan Tan is a shareware card game for three to eight players, if less than three players participate the computer plays the remaining positions so that at least three players are in the game. This version of the game contains the original game plus the Sevens/Parliament, Five or Nine, Pay or Play variants. The game is played with a standard deck but in Fan Tan the Ace counts as the lowest card in the deck. It is played for chips and continues until only one player has some chips left, naturally that player is the winner. The whole pack is dealt out, so some players have one more card than others and, briefly, the games are played as follows: Sevens: The 7 card is the foundation card for any suit. Once a seven has been played the six and eight of that suit can be played building up a sequence to the king and another down to the ace. Five or Nine: The first card laid must be a five or a nine of a suit, after that play continues as described in Sevens Pay or Play: The first player leads any card. The next player in turn must play the next higher card in that suit or pass. In this variant the suits 'wrap around' so when a king is played the next cards in the sequence are the ace followed by the two. When a suit is exhausted the player who played the last card starts a new suit, again playing any card. Original Fan Tan: The first lead can be any card and this fixes the foundation card for all other suits which are built up/down in sequence as described in Sevens The game is entirely keyboard controlled. It has basic sound effects and command line switches to start the game with sound turned off and to force either a colour or monochrome display.