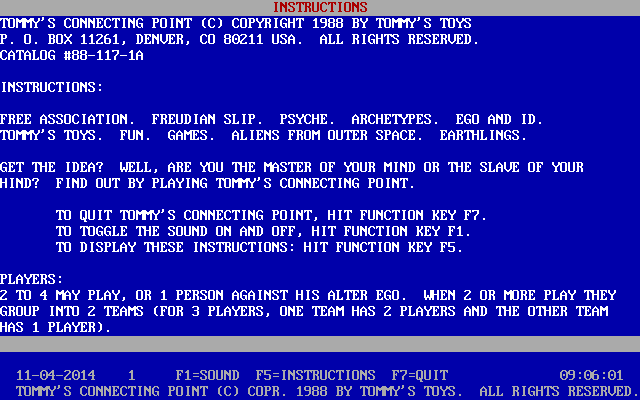 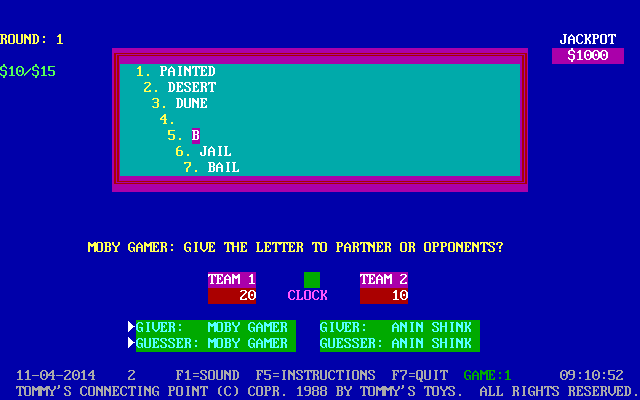 Tommy's Connecting Point is a word association game. It may be played by one person playing against themselves or by two or four people. The game is based on free association word chains, similar to the UK party game Tennis-Elbow-Foot, where there is a connection between the words one and two and between words two and three but not necessarily between word one and three or any other in the chain. In this implementation the word chain consists of seven words, with words one and seven supplied. The objective being to guess the intervening five words. Players take turns and may either opt to guess a word or pass the opportunity to their opponents. They also get to nominate which word their opponent will have to guess, the top most or the bottom-most word on the guess list. The game starts by giving the initial letter and the player attempts to complete the word within fifteen seconds. If they are successful then they win the points, or in this case virtual dollars. If not, then it becomes the other teams turn and so-on until the ladder is complete. There will naturally be numerous attempts at guessing a word and each time the game will reveal one more letter but it will never reveal the full word, the last letter will always remain hidden. A match consists of three rounds. At the end of round two the leading team gets to play a missing link round. At the end of a match the wining team gets to play a bonus round against the clock. The game is entirely keyboard controlled. It has basic sound effects and command line switches to start the game with sound turned off and to force either a colour or monochrome display.