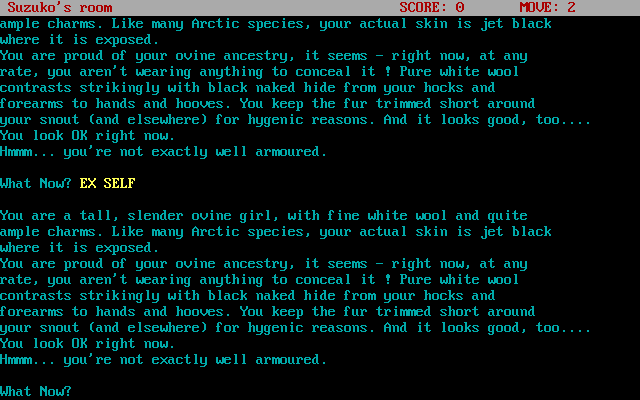 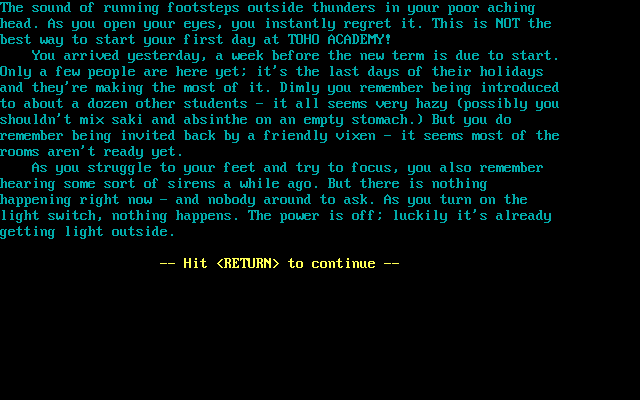 Toho Academy Adventure is a single-player, text adventure game. This is one of a series of games based on the Toho Academy stories by Simon Barber. The Academy stories are set in a future universe and its pupils are all highly developed animals who use serious weaponry and magic to defend the world against Lovecraftian invaders, the invaders being mutated plushie toys. The player takes the role of a half-sheep or as the game describes you ' a tall slender ovine girl with fine white wool and ample charms '. After a night out partying with other students you wake up to find you're late for your first day at the academy, not a good start. There's no-one around, did you hear sirens a while back, and the power is off as you run to class in the early morning light. The academy is on an island and is populated by many creatures, some friendly and some definitely hostile. Enemies when they are encountered must be fought, for each enemy there is a specific weapon, for example the Chaos Kare Bare is vanquished with Plush Solvent, but one weapon may still kill several different foes. In the original version there are one hundred and thirty two locations and a maximum of two hundred and seventy eight points to be scored. There is a later version, improved version, which has among other improvements updated text, and a VIEW command with artwork, this version has one hundred and fifty nine locations and a high score of three hundred and thirty three points. The game is entirely keyboard controlled, naturally, and was developed using The Adventure Game Toolkit (v1.5). There is a save / load game function which is especially useful as there are many monsters to fight and lots of interesting and novel ways to die.