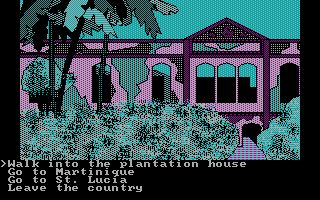 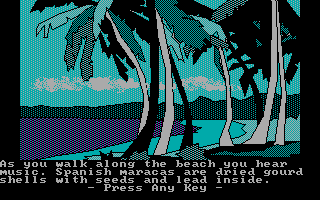 The third addition to the Spy's Adventures series is another geographical edutainment title, featuring the same combination of international travel and mystery-solving as the previous two installments, and similar to the contemporaneous Carmen Sandiego games. All-around bad guy Dr. Xavier Tortion (Dr. X for short) is up to his jewel-thieving antics once again, this time in South America, and must be tracked down along with his contraband. The game can be played in single-player mode, or up to 6 players may play cooperatively ("spy network") or competitively ("spy vs. spy"). The chase starts in a country of the player's choice, with a map of the continent, some money, and dossiers with basic information on the various countries. The player can travel from one country to its neighbors on the map. Each country offers at least one site to visit, and investigating the various locations will uncover clues to the whereabouts of jewels - informants will also be found, who can be paid off with money or jewels to provide crucial clues to Dr. X's hiding place. The goal is to guess his location in no more than 3 attempts, or he escapes and the quest comes to an end. If he is caught, a score is awarded based on the time taken, jewels recovered, guesses left, and letters still not exposed (in the clue to Dr. X's location).