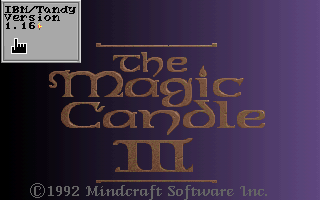 This is another game in the Magic Candle series of top-down RPG's that bears more than a slight resemblance to the old Ultima games. These games feature several other innovations over the Ultima series of games, the best example being a more complex party management system which makes it possible to divide your party of adventurers and give each party a different task. Compared to earlier games in the series, The Magic Candle III features little more than further enhanced VGA graphics and a new storyline. In The Magic Candle III, you and your party of adventurers, which can be transferred from the previous Magic Candle games, must stop a mysterious "blight" that is spreading through the country.