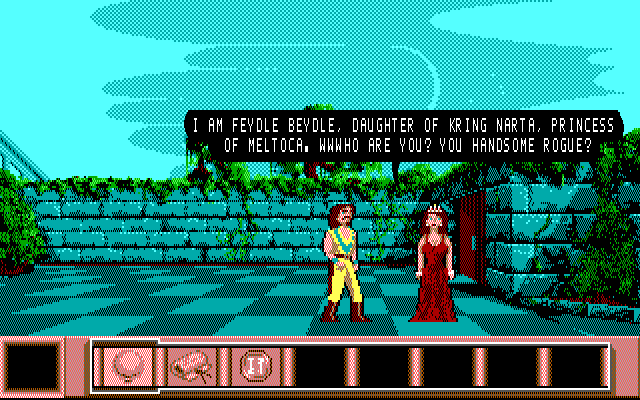 The Kristal of Konos is a magical artefact described as the key to world peace. However, an evil being known as Malvalla has taken it, releasing Chaos into the universe. A space pirate named Dancis Frake ventures on his twin cannon space galleon to the planet Meltoca, where he hopes to find clues concerning the Kristal's whereabouts. Based on the theater play The Kristal of Konos (1976), The Kristal is primarily an adventure game with space shooter and fighting segments. The adventure portions consist of exploring populated planets, gathering clues and talking to characters in order to gain information. When traveling between planets, the player-controlled ship may be attacked be enemies, which must be eliminated in shooting sequences. Dancis has special strength and psychic ratings, which may increase or decrease depending on his actions. He may participate in swordfighting to improve these parameters. "Skringles", a form of intergalactic currency, can be found, earned, and spent in the game.