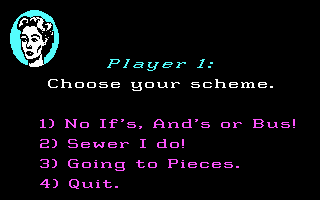 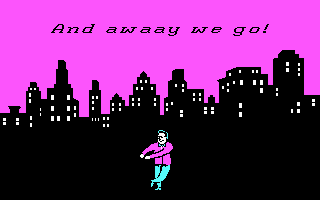 Based on the 1950s TV series of the same name, The Honeymooners is a series of mini-games. Ralph Kramden wants to hold the annual meeting of the Raccoon Lodge at Miami Beach. However the treasury is fairly empty and in order to make his dream come true, the Kramden's and their friends, the Norton's will need to work extra hard and be a little lucky to reach the required amount. But Miami Beach is a popular destination, and the families must hurry before all the hotels are booked. The Honeymooners is really 4 different mini-games for one to four players who compete against one another. The goal is represented by a train car heading towards Miami Beach. The goal is to earn enough points (presumably representing money) to move the train car all the way there. In order to gain points, the player attempts to complete one of the following mini-games: No If's, And's or Bus : Ralph Kramden is a bus driver and must pick up as many passengers and take them to their destinations. The game is played as an overhead view over a map of steet names and passangers. The goal is to pick up waiting passangers and deliver them to the destination they want. The player only controls the bus's direction (up, down, left, right) and speed. Delivering passengers earns points but leaving passengers on the bus will lose points. Hitting other traffic or returning to the bus depot will end the game. Sewer I Do : Ed Norton works for the sewer company and has a map of the tunnels' layout. However his map has blown away so he must navigate the sewers from memory, fixing leaks and eventually returning to his ladder. The game is played in first-person 3D maze with the player being able to move forward, back and rotate left and right. Going to Pieces : Alice Kramden works at a department store and is talking to Trixie when she drops a jig-saw puzzle. The player must reassemble the image before time runs out. Additionally,"The $99,000 Answer" is Ralph's favorite game show, sometimes appears at the end of mini-games as a double-or-nothing bonus round. Players must answer trivia questions related to The Honeymooners TV show. However game shows are all about luck and sometimes the player will win or lose randomly without a question being asked.