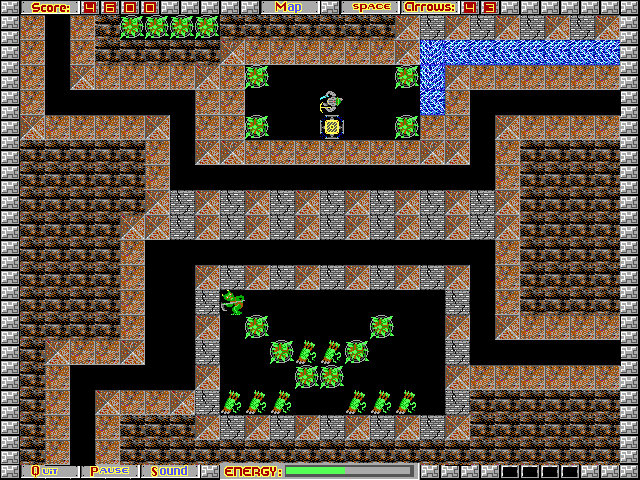 The Dungeons of Grimlor II is a single player, shareware, DOS dungeon game. In the first game, The Dungeons of Grimlor a dragon had stolen the souls of all the children of Grimlor who lived beneath the town so Sir Merdimek ventured into the dragons lair, the dungeons beneath the town, to defeat the dragon and its minions, collect treasure, and free the children. In this, the sequel, the dragon is back and as a lich, a being that's both alive and dead, he's stronger than ever. Sir Merdimek's quest is to find the dragon and destroy the source of its power, killing it for all time. To do this Sir Merdimek must locate the keys that will open the doors to the depths of the dungeons where he will find the Cross of the Lich that is the source of the dragon's power. The dungeons are labyrinthine and are full of traps to avoid, monsters to battle and puzzles to solve. Boulders can be moved to trap nasties and to block arrow shooting walls. There are some monsters which cannot be killed by Sir Merdimek's arrows, though they are vulnerable to other things, and there are wizards who can raise the dead. Sir Merdimek can ride rivers to secret rooms and use teleporters which may lead more hidden treasures. The full game consists of three levels; Episode 1: Resurrection Episode 2: Insurrection Episode 3: The Lost Souls Episode 1 was released as shareware; the remainder were only available in the purchased version. The game can be saved at any point, however there are only five save slots available.