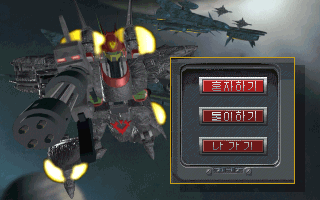 The Day 5: Assault Dragon is a horizontally scrolling sci-fi shoot-em-up and (in spite of the number in its title) the fourth installment in the Korean-made series. The gameplay is similar to the predecessor in allowing the player to choose between two pilots, or have two players defend Earth against an onslaught of mechanical aliens cooperatively. The male pilot (Kim Jin-hyeok) pilots a craft called Miru Fighter, while the female pilot (Kim Mi-ri) controls the Miru Base. The weapon and power-up system is similar to that of The Day II. Like in Icarus, the two spaceships can be combined into one mecha, with one player controlling its movement and the other firing its weapons. The side-scrolling environments have depth, with a 3D-like perspective that allows enemies to move into the screen.