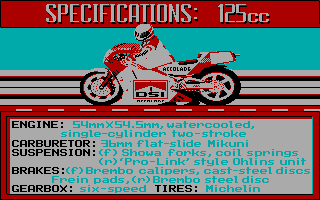 As the name suggests, The Cycles simulates International Grand Prix Racing, allowing a player to compete against 9 computer rivals. Choose from three classes of bike (125, 250 and 500cc), and between 8 (Japan, Australia, USA, Spain, Italy, France,England and Sweden) and 15 (Japan, Australia, USA, Spain, Italy, Western Germany, Austria, Yugoslavia, Holland, Belgium, France, England, Sweden, Czechoslovakia and Brazil) original tracks depending on the version, at five difficulty levels (with the lower ones offering automatic gear changes). The player can enter single races (always including qualifying) or complete in a full season. The action is viewed from the handlebars of your bike, a novelty for motorcycle racing at the time. The game engine is similar to that used by Grand Prix Circuit, but now incorporates hills.