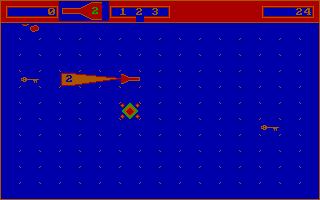 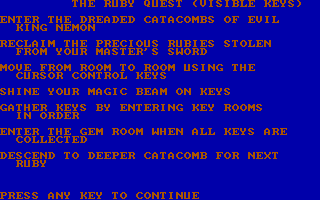 The Catacombs of Nemon is a single-player game which is entirely keyboard controlled. The game takes place on a single screen around which are scattered boulders, numbered keys, and an exit door. The player uses their torch to move around the screen and as the beam of the torch illuminates a key it's number is displayed. The player must collect the keys in sequence before they can open the door and escape to the next level. Obviously there are obstacles and in this game these take the form of rock falls which can crush the player, and a fast moving minotaur who shoots fireballs. He will either attack the player of block their passage with fire. The game has three modes of play: The Ruby Quest: The keys are visible on screen but their numbers are only revealed in torchlight The Emerald Quest: The keys are invisible until a torch beam illuminates them The Diamond Quest: The keys are invisible and stay invisible Each mode has three levels of difficulty. Points are scored for keys collected, levels cleared and for killing the minotaur.