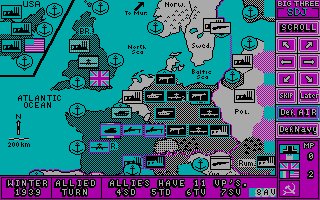 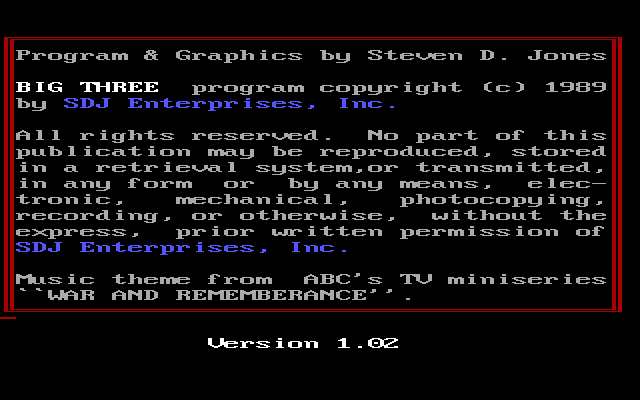 The Big Three is a detailed World War II strategy game, named after the collective term for the leaders of the three superpowers of the time, Joseph Stalin, Franklin D. Roosevelt, and Winston Churchill, who united to oppose the Axis forces under Adolf Hitler. The game is played with the keyboard, mouse or joystick. It is based on the traditional war game hexagonal grid system. Army, air-force and naval units are represented. Units such as tanks, ships, bombers etc. must be built before they can be deployed, supply chains must be secured and so on. The shareware version contains three scenarios: Scenario 1 - No More Phoney War (Western Front 1940) Scenario 2 - After The 1st Thaw (Eastern Front 1942-44) Scenario 3 - Afrika Korps (Mediterranean Front 1940-42) Four further scenarios, Russian Steppes, D-Day, Fall of the Reich, and Total War were provided in the full registered version.