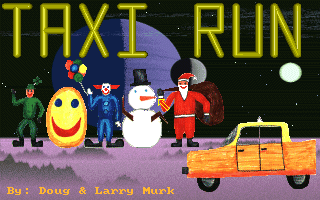 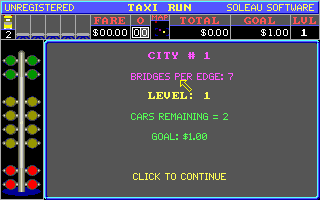 Taxi Run is a single-player, mouse controlled, shareware, puzzler. The gameplay here is very similar to games like Pipe Dream and Pipe Mania and the many variants they spawned. In those games the player had to alter the flow of a liquid by placing pieces of piping into a grid. Here the pieces are already in place in a 9x9 grid but instead of being pieced of piping they are sections of road. The objective of the game is to change the path of the roads so that the taxi driver can pick up their passenger and deliver them to their destination. The player has two cars and must earn enough in fares within the time limit of their shift in order to progress to the next level. The roadways are already in place and are rotated by clicking on them with a mouse. When a roadway has been used it becomes unavailable to the player later in the game until the next passenger has been picked up. The game is further complicated by having a game area slightly larger than the visible screen which can make finding and dropping off a passenger a bit tricky, Also there are bridges that lead off-screen. If the taxi follows one of these roads it cannot return to earn more money so the turn ends. The game has much in common with Soleau Software's other games: Ant Run, Beetle Run, Spider Run and Wall Pipe.