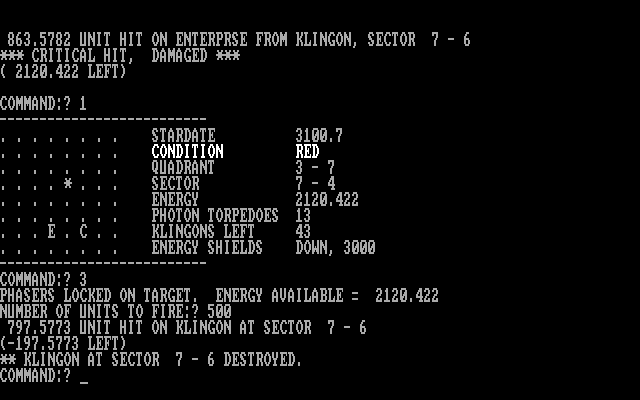 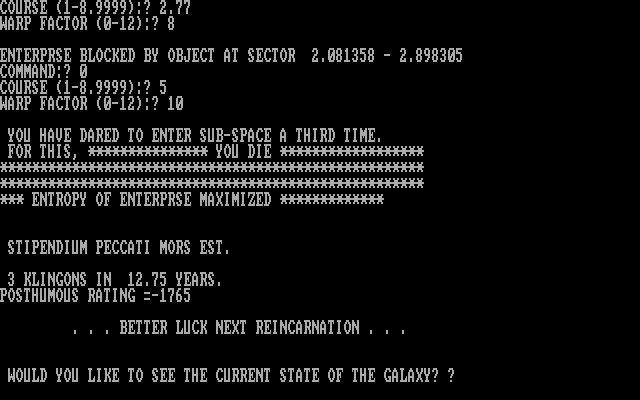 Super Star Trek is an adaptation of the Star Trek mainframe game from the 1970's and features similar gameplay. As captain of the Starship Enterprise, the player's mission is to destroy the Klingon battle force (usually consisting of around 17 battle cruisers). There is a time limit for this mission which needs to be completed by a specified stardate. The galaxy is broken up into 8 quadrants, with each quadrant containing 8 sectors. When the game begins a varying number of Klingons, friendly starbases, and stars are randomly placed. On each turn, the player needs to enter a command for the Enterprise. There are 15 commands available, which include firing phasers or torpedoes, viewing short or long range scanners, damage control, shields, setting a course, and engaging the warp drive. In this version of the game commands are entered by typing a number from 0-14; if necessary, the game will prompt for any additional data for the selected command (such as setting a warp factor or selecting a course). By using the scanners, the player needs to locate the Klingons and guide the Enterprise to those locations and destroy them. Phasers and torpedoes are available for attacking; phasers do not need to be aimed but are less powerful (especially as distance from the target increases). Torpedoes need to be carefully aimed at the target allowing the possibility of missing, however they incur more damage. After each turn, the Klingons are able to attack the player as well as move throughout the sector. The Enterprise is equipped with shields to reduce damage, however they need to be lowered before the player is able to fire on the Klingons. If needed, the player can repair or refuel the Enterprise by visiting a starbase.