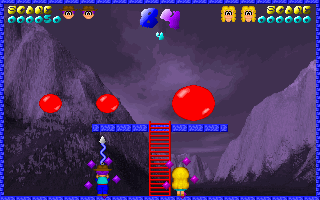 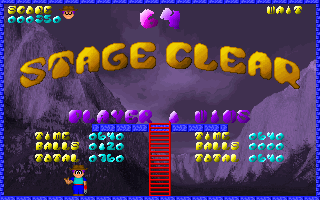 Super Bubble Mania is a shareware Pang clone. As in the original game, up to two players have to clear the screen of bubbles and other bouncing objects within a time limit. The characters move sideways on the bottom of the gamefield, climbing ladders, platforms and shooting harpoons that divide the moving targets into smaller, faster versions of themselves. Like in an arcade machine, the second player can join at any time. The game has three modes. World mode is the main game, where players go from level to level (50 total) of increasing difficulty, with five boss battles. Crazy mode has 50 expert levels for master players. Mania mode is the survival mode, where the levels are devoid of platforms and other obstacles and only have the bouncing target objects. Power-ups and bonus points drop from destroyed objects and can be collected from the field. Harpoon tips change the characteristics of the weapon, making it stick to the top or allowing several simultaneous shots. An alarm clock stops the movement of the objects, and a hourglass adds a few seconds to the timer. The gameplay is very similar to Dinosaur Balls.