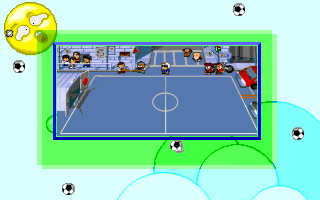 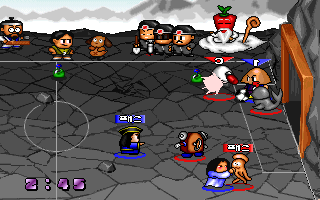 Super Action Ball is a Korean-made humorous arcade-style football (soccer) game. Teams consisting of four players each compete in small stadiums. Though the background graphics suggest open-air areas, the ball can ricochet off the field's borders and is physically unable to leave it. Most football rules and features (offside, corner kick, etc.) besides passing, tackling, and kicking the ball are omitted. There is also no half-time; the player can determine the length of the game, ranging from three to twelve minutes. Contrary to regular soccer rules, the game allows kicking and tackling players who are not in possession of the ball. Players lose hitpoints and become incapacitated for a short while. In addition, damaging objects may be thrown on the field, and some of the stadiums contain traps. All the players are either "super-deformed" humans or little monsters; any line-up of these can be chosen to form a team. The game can be played by two human opponents, or against computer AI.