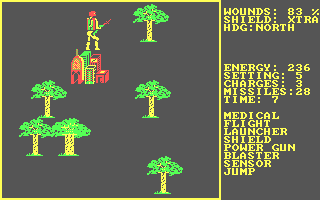 It's one warrior against an empire, but you are a Fury, a paladin fighting for freedom, and you have nuclear missiles. Your mission is the liberation of Fornax, a peaceful planet firmly under the boot of the Interstellar Union of Civilized Peoples. The Union has tanks, skimmers, forts, and countless troops. You have a suit of force-shielded, powered armor which jumps, flies, self-repairs, and will even tend to your wounds. Skulk in the woods and snipe, or move fast and blast away. Either way, stay alive, complete your mission, and return to the recovery point. The game screen looks down on one of sixty-three square kilometers, resolved to twenty meters, showing terrain, your position, your enemies, and frequent blaster fire. Terrain is key to survival, as sooner or later you'll need to go to ground and heal up. However, it can hinder your reconnaissance as much as your enemies', and sometimes you'll find yourself under fire from an unseen source. Sound matters, too: your powergun is nearly silent, but the blaster alerts enemies as effectively as it destroys them. Play is turn-based, but fast. The opportunity to press the right key flits by quickly, bringing new bursts of enemy gunfire around you. Varying movement options, weapons, and enemies make tactics the determining factor in your success. Two scenarios fit into the story: a diversionary expedition to blast everything in sight (except the civvies, so check your targets!), and a search-and-destroy mission to start the revolution. Five difficulty levels and varying equipment (customizable in the disk version) lend additional variety.