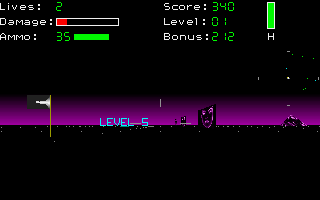 Spectre is a 3D shooter where the player drives a little red car/tank and blasts away enemies. The gameplay is similar to Battlezone, and obviously inspired by it. There is a selection of three tanks, each with three values (speed; armor; and firepower) balanced out to match its name: Tough Guy is heavy on armor, but slow and not very powerful; Speedy is fast, but low armor; and Balanced combines both strengths, but decreased. A fourth tank allows the player to design a custom variant. Every level consists of a large plane filled with enemy tanks, several psychedelic walls with odd images that often flicker or warp resembling an acid trip, and tacky 3D models like windmills. The object of each level is to either destroy all the enemy tanks in the level, or to collect all the flags. Every level has a certain theme to it, anything from plain green to a colorful blinking eye or images of sand dunes are to be found on the walls, windmills and flags throughout the level. With every passing level, enemy tanks grow smarter and their rates of fire increases. Also in later levels, new, smarter, more powerful enemy tanks join the skirmish. The player has a limited amount of ammo, but driving over ammo deposits replenishes a small amount of ammunition, as well as driving over shield deposits grants additional shields. The three different views (first, third, and top-down) allow the player to incorporate additional strategies into the battles. The game boasts having supposedly an infinite amount of levels, though anything after level 80 is almost instant death. A high score table is also included. An additional note-worthy feature of this game is the multi-player mode. Up to eight players are supported over IPX, or NetBios (or two via modem or serial port). The network option offers three Cyberspace Scenarios: Arena - free-for-all battles, get one point for each opponent destroyed. Flag Rally - a match point given for collecting six flags, destroy someone to get any flags being carried. Base Raid - Akin to "capture the flag". Two teams, two bases; get match point for destroying opponent base. The CD-ROM manual includes a "Cyberpunk story", to give background information on the game which consisted of a cyberjock named Hart who lived for the battles in the Arena.