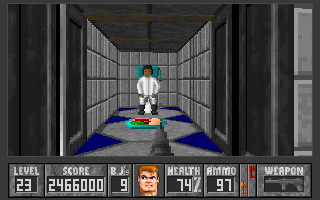 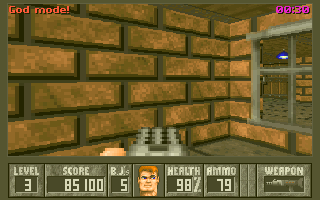 From the authors who brought us Spear Resurrection comes a direct sequel, further extending the storyline of the Spear of Destiny series. World War II is long over, the Spear and its transcendental powers believed lost forever, and all Nazi plans for resurgence seemingly thwarted. But disturbing things are brewing in a remote area of the Spanish countryside: an old intelligence contact of B.J. Blazkowicz informs him of renewed secret activity amongst Nazi holdouts. Occult machinations are stirring into motion yet again, and it's up to B.J. to uncover the shocking truth and stop them... or die trying. This installment retains the familiar first-person shooter mechanics of the previous games, where B.J. sneaks into a heavily defended keep and climbs from level to level by eliminating all opposition, finding treasure and secrets along the way. It is structured as a single extra-long 'episode' of 25 normal levels plus 12(!) secret ones, featuring new enemies, bosses and graphics. The engine is still based on the original SOD source code, but has been further extended with new capabilities: additions include ceiling and floor textures, distance shading, in-game messages, new types of secret areas, more new weapons (a silent stealth-rifle and a rocket launcher), portable medkits, wall switches, rocket turrets and flame-throwing traps. There's even an extra challenge for diehard Wolfers - a new game mode which only allows a limited number of savegames.