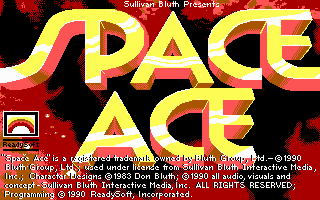 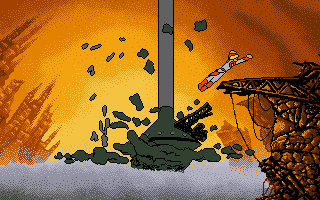 Intergalactic hero Space Ace faces off against the evil Commander Borf, who hits him with an Infanto-Ray, turning Ace into an adolescent version of himself called Dexter. Now Ace/Dexter must not only rescue his girlfriend Kimberly but also prevent the destruction of the Earth at the hands of Borf. Readysoft's version of the laserdisc arcade game Space Ace for 16-bit computers follows the mold of their earlier Dragon's Lair adaptation: only selected scenes from the original game are used, with all the graphics redrawn from the original cel animation to fit the capabilities of the target machines. As in Dragon's Lair, the game consists of the cartoon movie running by itself, with the player being required to press the right button at the right time (either moving or firing Ace's gun) or see one of many death animations. The original arcade game offered some alternate paths through the game by letting the player choose between playing as Dexter or turning him back into Ace - the computer version is missing this option, and one always plays as Dexter or Ace depending on the scene.