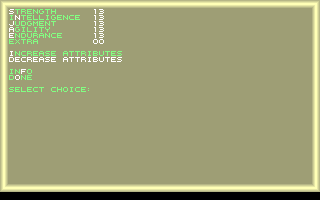 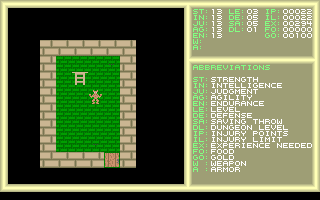 Silmar is a rogue-like/hack type of RPG, with random generated dungeons, in which you as an adventurer are descending to fight monsters and find treasure. The game was first released for DOS around 1990, with later incarnations running on Windows, Linux and OS/X. The DOS version has tile-based graphics, and was split in three parts. The first ( Dungeons of Silmar) was distributed as shareware, and the second ( An Everpresent Magic) and third ( The Forward Terminus) parts were made available with the purchase of the first part. The story is that the evil wizard Syrilboltus was defeated in a war with a dwarf country called Gormarundon, but left a cursed magic labyrinth of dungeons under his tower, crawling with monsters, nearby the village Silmarii, which needs to be cleansed and sealed by reaching the bottom of the dungeons. Many adventurers have tried but failed, and now you are to try your luck. You choose your character from a list of mixed characters, ranging from werewolves to baseball players (oh, the horror!), and venture forth. As is usual with these games, there is a shop in the village above where you can purchase necessities and sell any treasure you find below. You can reach the shop by using a teleport bead, so there is a quick way out if things get too hot below. The updated version of Silmar, v2.x (1999-2004) has pixel-based graphics, but while the backstory and rogue-like game style is the same, the map screen and player characters are differs from the original, e.g. now you can only play a human adventurer, and the above ground area includes the village, a smithy, a priest for healing, a wizard for magic supplies, a shop for purchasing supplies, and a royally appointed trader that purchases your loot/goods, plus a messenger that can take items to your home village.