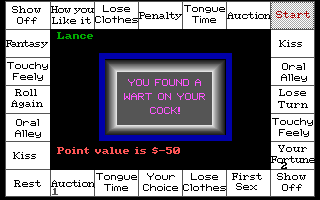 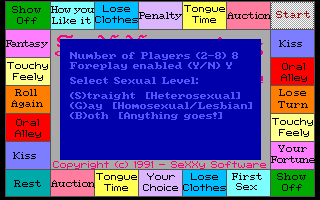 In this Monopoly-style board game, 2-8 players take turns rolling a die to move their game piece around a game board, being prompted to perform different sexual acts on specific other players depending on which square they land on. Players compete for money, gaining $10-200 every time they complete a sexual act, and losing similar amounts of money every time they refuse. Upon reaching the goal amount of money, players are shown a series of "climax" videos Some squares, such as "Oral Alley" and "Tongue Time", show a pornographic video (usually 3-4 frames of video displayed in a loop) of the act the player is being asked to perform. Other squares such as "Lose Clothes" and "First Sex" only provide textual descriptions. The "Auction" square asks other players to bid to perform a sexual act on the player that landed in a square, and also serves as a jail for players that find themselves in debt. Sexual acts range from describing a fantasy to groping genitals to performing oral sex, however some of the videos also depict penetrative sex and analingus. The game requires each player to specify their sex, and the Sexual Level must be set to Straight (Heterosexual), Gay (Homosexual/Lesbian) or Both (Anything goes!) before the game starts to define acceptable pairings for sexual acts. The Sexual Level also determines which of several "climax" videos are shown when a player wins.