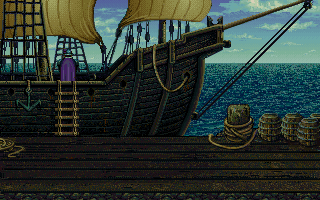 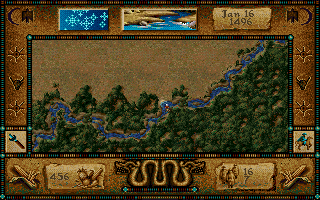 Seven Cities of Gold (7COG), Commemorative Edition, is a PC remake of the classic game designed by Dan and Bill Bunten for the Atari and Commodore 64 computers. You play an explorer commissioned by the King and Queen of Spain to voyage to a new world, claim land for the Crown, negotiate with (or conquer) the natives, and gain fame and fortune for yourself. Between voyages, you'll have to buy and outfit ships and hire men to crew them. As in the original 7COG, you can play at three different skill levels, and choose to explore either the historical map (consisting of the Americas at the time of Columbus' journeys) or a land form randomly generated by the game. As befitting a "Commemorative Edition," the PC version of 7COG has been beefed up with hi-res graphics and digitized sound. 7COG is a rare example of a game being completely redeveloped for a specific platform instead of merely being ported over. (However, Seven Cities of Gold did in fact come out natively for the PC in the mid 1980s. --Ed.)