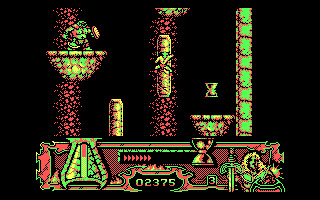 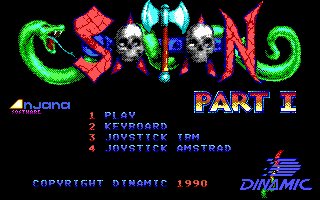 Three magic scrolls must be found in the first part of the scrolling hack 'n' slash game, before you can make the journey to defeat your foes and rescue the other wizards in the second part. As with so many Dinamic games, the two parts are loaded separately, but the second can't be accessed until a password (provided at the end of part one) is input. Contact with the enemies en route (which are mostly mutant demons) drains your limited energy, and you are also working against a time limit on each section. As well as your magical powers (which are stronger in part two), you can collect swords to attack, as well as lightning bolts which can be collected to destroy all enemies on screen. In part two vanquished foes release coins, which can be spent at shop sections on rechargers, shields and teleporters amongst other things.