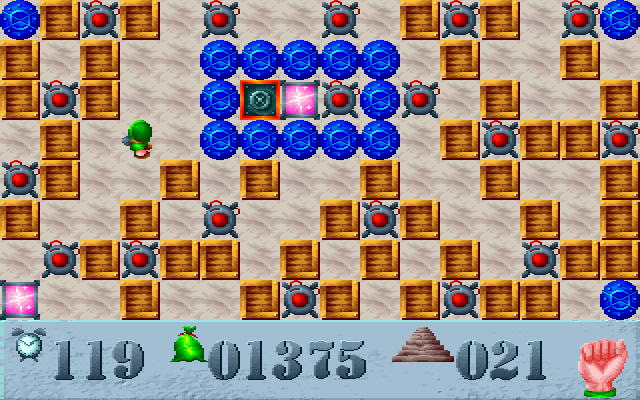 Saper is a two-dimensional platform game with elements of puzzle-solving. The story tells of a criminal organization, which managed to steal important NATO documents. CIA agents have failed to recover the documents, therefore the authorities decide to blow up the headquarters of criminals. The building has many explosives installed. The player has to destroy all the bombs which are visible on the screen and then reach an exit point. Some of the bombs and exits are not easily reachable. To get access to them it is necessary to move some tiles too. The basis for the completion of the mission is the order of detonation explosive devices. There are tiles which have unique purposes. An additional difficulty is the time limit, to pass each of the 64 levels of the game authors dedicate 120 seconds. The player will face as well disappearing tiles, exploding mines or surfaces of ice that move the player to the first no ice area. In contrast, the expanding plant, the detonator of all bombs or the teleport should greatly facilitate the task. The game has a built-in editor which allows to modify all the completed boards.