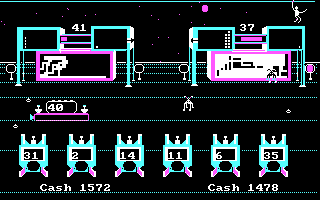 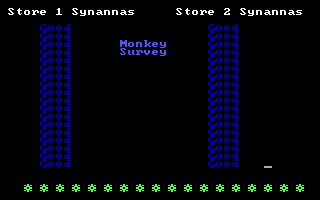 Run for the Money is an educational game about running a business. The game is for two players who share the same screen to move around their characters. The characters are bizlings, space travellers who have crash landed on Planet Simian. The crash has caused damage to the ship's paint shield and before they can leave they need to acquire paint. To buy the needed paint it is first necessary to make some money. This is done by producing and selling synannas (synthetic bananas) to the Simian population. First the players have to acquire a raw material called ruf which is done by moving the bizling to one of the six rufhouses located on the screen. Each rufhouse has its own price which indicates its quality. After entering a rufhouse the player can wait for the price to drop but there is a risk that the seller will decide to not sell. After buying the rufs they can be brought to the space ship and manufactured into synannas which the Simians then will pick up and pay for. Sometimes it's necessary to advertise which is done by turning on a sign. The price is set at $40 when starting out but after each week the player can set their own prices. At the end of each week the players will get information in the form of graphs on how they are doing. The players also get access to a prediction machine which can be used to see what might happen with the profits in the coming week. Awards are then given to the player that gets closest to the predictions made. Paint can be bought from a scientist that moves around in a paint van. When it stops there will be an auction for each bucket of paint with the highest bidder getting it. The player that buys the paint can then begin painting the shield. After every two weeks it is possible to attempt a launch of the space ship. The shield does not have to be fully painted but the more paint it has the better the chances are.