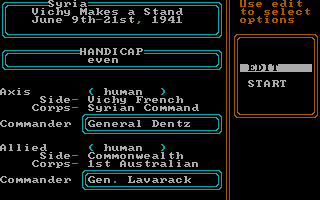 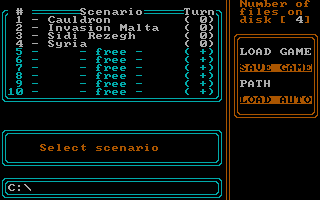 Rommel: Battles for North Africa is a turn & hex-based wargame (one of the series built on the Battlefront engine) dealing with the battles between Allied and Axis forces in North Africa during the Second World War. The eight scenarios included (playable from both sides of the conflict) are: Syria (Operation Exporter, 1941), Sidi Rezegh (1941), Alam el Halfa (1942), The Cauldron (1942), Maknassy (1942), Kasserine Pass (1943), Tebaga Gap (1943), and a what-if German invasion on Malta. As with Battlefront the command scale is at the corps-level. The battle system incorporates the factors of adverse weather and terrain, supply, experience and morale. A complete range of unit types is provided. Victory depends on seizing the key locations within the turn limit. The game was packed with WarPlan scenario editor and WarPaint map/unit graphics editor (a common feature of Battlefront Game System titles).