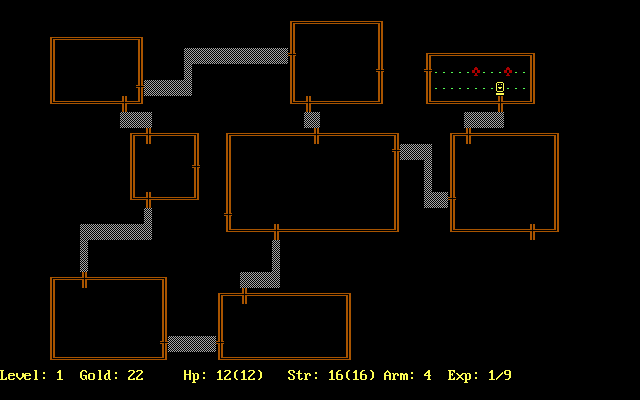 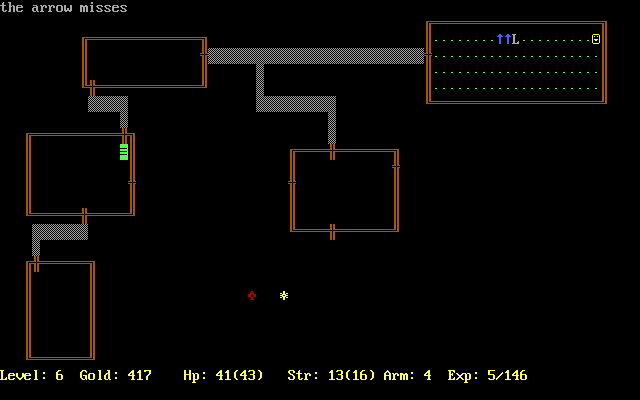 Rogue Clone is an early variant of Rogue, the grandfather of all roguelikes, specifically of the UNIX version 5.3. The first version of Rogue Clone was first released in 1986 for UNIX. At first glance, Rogue Clone is quite indistinguishable from the original: Enter some randomly generated dungeon, bash monsters, grab treasures, evade traps, and find the stairs to the next level, all this to recover that fabled Amulet of Yendor and make it back to the light of day -- alive, preferably... everything in glorious ASCII graphics. On a second glance, one realizes that Rogue Clone features some additions and modifications to game play. For example, there are no dark rooms, and the difficulty level is slightly easier -- monsters spawn quicker, but there is much more items to be found. Another very helpful feature is that unknown items are automatically identified after use, so that next time you find them, you'll know what awaits you. The first version of Rogue Clone also omitted traps and secret doors, later versions have both, but traps may not go off if an inadvertent adventurer steps onto them. Mazes are also drawn differently, and there are other changes in the items and their characteristics. Otherwise, this version plays pretty much like the original and earns its name.