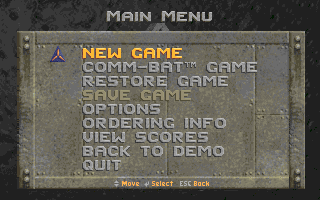 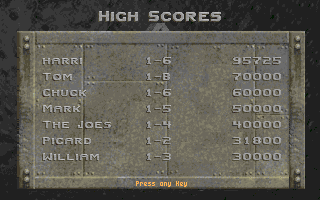 A madman with power to kill millions has been discovered, and HUNT (High-risk United Nations Taskforce) has been dispatched to discover his plans. Your team was infiltrating his island stronghold when everything went to hell. The infiltration boat exploded and fire came from all directions. The only way out is in, into the the fortress, but to stay out here would be certain death. So in you go, guns blazing... Rise of the Triad, a first-person shooter, is the successor of Wolfenstein 3D, with a somewhat improved 3D engine. Everything is still composed from blocks, but multiple vertical levels have been added; there are stairs made of platforms floating in air, and jump pads which launch you (and the enemies) high up so that you can walk over tall barriers in your way. The game offers a lot of weapons. You begin with a pistol, but later you can find an extra pistol for John Woo-style shooting, and a MP40 rifle. All these weapons have unlimited ammo. You can also find more potent weapons - from classic rocket launcher, to quite wacky contraptions such as a "drunk missile" launcher or the "Excalibat", a powerful baseball bat. However, you can carry only one such a strong weapon at a time, and they have limited ammo. Enemies are mostly humans equipped with various weapons. Their attacks can be quite varied; some of them can steal your weapons (though you can retrieve them after killing them), other shoot nets at you that trap you (you have to wriggle out, unless you found a knife, which will allow you to cut your way out). Apart from enemies, you'll be endangered by fireball launchers, rolling boulders and crushing walls. There's a lot of power-ups you can pick up. They all have various wacky effects: for example, "God Mode" makes you immortal and allows you to toss homing, insta-death missiles; "Dog Mode" turns you into a... dog, which can fit into small spaces (and is inexplicably invulnerable to weapons); "Shrooms Mode" makes everything shine with bright colours, as if you were on drugs; "Elasto Mode" makes you very prone to bouncing off walls when you run into them. ROTT also offers a lot of multi-player game modes; there's the standard deathmatch and "Capture the Triad", but there are also more varied modes - e.g. in "Collector" the players have no weapons, instead trying to collect as many "triads" as possible; in "Deluder", the players earn points by destroying "eluders" which move around the level.