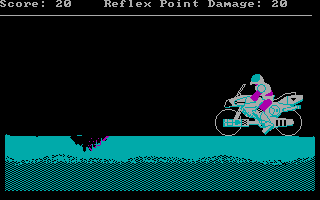 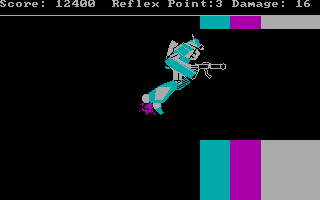 Based on events from the Robotech animated series, the crustacean Invid have invaded the Earth and set up a base of operations, code-named Reflex Point. Holed up inside is the Invid Prince, who must be defeated to ensure the destruction of the base. As a freedom fighter, you will make use of the multiform vehicles familiar from the series - the Cyclone, a futuristic motorcycle that converts into a powered armor suit, and the Alpha, an aerospace fighter that morphs into a robotic form. Various stages will be encountered en route to Reflex Point; at the beginning, you'll have to avoid pitfalls while traveling by Cyclone, and switch to first-person armor mode in order to chase off Invid troopers. Once you get to your Alpha mecha, a short but perilous flight will take you to the enemy base, where you will have to pierce the laser barrier and face off against the Prince.