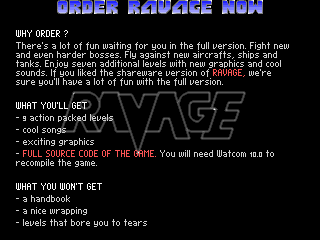 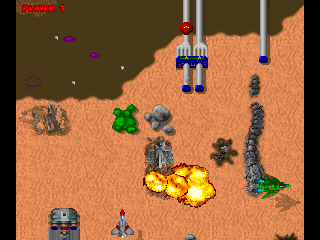 Ravage is a shareware vertically-scrolling shoot 'em up game that bears a significant similarity to Raptor and Tyrian. The plot of the game puts the player into the role of an unnamed pilot who must defeat numerous opposing forces in order to rescue his bride. Ravage has typical shoot 'em up gameplay mechanics: the player's ship must be manoeuvred through each level while dodging projectiles and trying to destroy as many enemy ships and ground vehicles as possible. Based on the player's performance, successful completion of a level is awarded with an amount of credits, which can then be spent to purchase additional weapons for the ship, upgrade existing ones, or to buy an extra life. Game progress can only be saved between levels; during a level, the concept of limited "game lives" is used to allow the player to continue if the ship was shot down. In addition to the single-player mode, Ravage also has an option for a two-player co-op mode, with the two players using different control devices to steer their ships (e.g. keyboard for the first player and mouse for the second player). The game features fully customizable controls, joystick support and a digitized soundtrack.