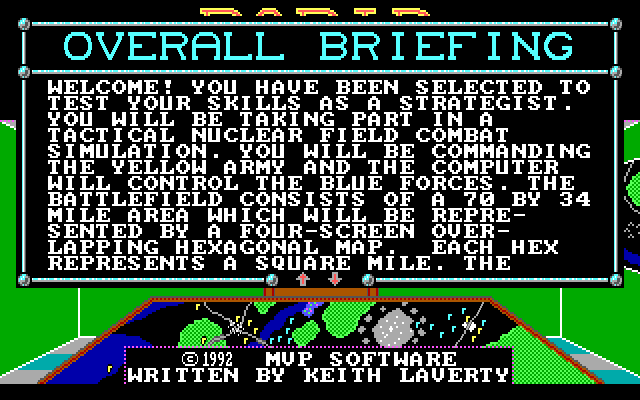 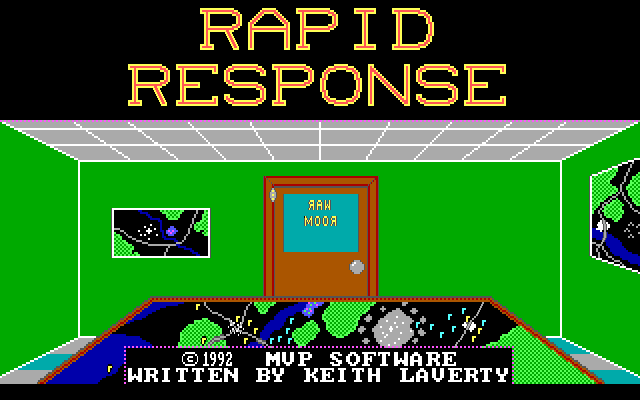 Rapid Response is a shareware, hex based, single-player trilogy of war games. The shareware release consists of part one of the trilogy, it has eight scenarios each of which can take between one and five hours or more to complete. The scenarios are varied, unusually some of them state that the player is not expected to win but to hold out as long as possible. In all games the player commands the yellow forces and plays against the blue forces of the computer. All games are played out on a hex map which is depicted on four overlapping screens. There are three kinds of combat: In-Hex Battle: as implied by the name, this is where both opposing ground forces occupy the same cell. Units involved in battle cannot be moved until the outcome is resolved. Dog-Fight: here both opposing forces have altitude units in the same cell, again units cannot be moved until the fighting is over. Range Attack: here a range weapon is used to strike a hex or air unit. Where the target hex contains units of both sides they are equally likely to take damage The game is largely keyboard controlled but a joystick can be used for some functions.