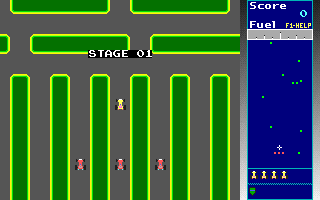 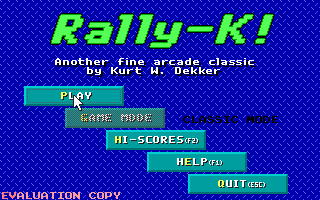 Rally-K! Is a single player, shareware, keyboard controlled game that is based on the game Rally-X. You control a small car running around in a maze to capture flags while avoiding hostile cars that try to crash your car. Also within the maze are additional hazards such as rocks and trees that will destroy the car if struck. The player's fuel is limited and when it runs out the car coasts along but much more slowly making the task of avoiding the hostile cars much harder. When all flags are cleared the player progresses to the next level where there are more enemy cars, different flags, different rocks, and different levels of speed, both for the player's car and the enemy cars. The game awards Challenge stages and additional cars as the player progresses. The registered version of the game has an 'Extended mode' of play featuring bonuses such as "Inviso," "Nitro," "Molasses," (slows down the enemy cars)